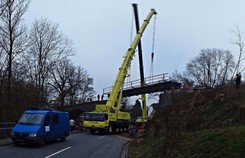 Rebuild and fit for the local public transport

After reconstruction according to the guidelines for historical monuments the steel railway bridge crossing the highway B256 in Denklingen is now again on its place. The figure of the bridge, built immediately after World War II and planed originally as an interim solution, has not changed, but now it corresponds also to the demands of modern railway systems.

During the years wind and weather made the bridge in need of a reconstruction. In September 2013 the registered association “Förderkreis zur Rettung der Wiehltalbahn” placed a corresponding order with Rohlfing. Previously, detailed coordination with the responsible authorities happens as well as extensive structural calculations and a European-wide tender procedure. In 2014, the tourism train to Waldbröl will run again according to time-table. The “Förderkreis” hopes that on day the railway will be used for regular local public transport.