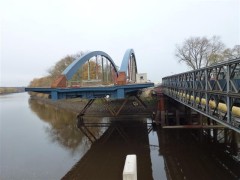 New steel bridge over the river Lesum in Bremen

The new bridge had to be pushed about 70 metres to get onto its place. Now it connects again both river sides of the Lesum in Bremen-Burg. All works including the displacement have been done by own staff and with own equipment of the consortium Heinrich Rohlfing GmbH and Wilhelm Scheidt.

For 600 years the bridge crossing the Lesum at this point is an important connection between Bremen City and Bremen North. The office for streets and traffic in Bremen decided to build a new arched steel bridge because the old one built in 1950 did not longer fulfil the today's requirements for truck and heavy load traffic.

As a first step the old bridge has been displaced completely. Therefore the steel  structure has been pushed step by step onto the road embankment on the north  side of Bremer Heerstraße. There it has been disassembled and finally removed to make free the way for the new, 70 metres long and 17 metres wide arched bridge. 550 tonnes have been pushed now from the north side over the river. Up to spring 2013 the residual works should be finished, too. During the construction period the traffic can use a temporary bridge during.