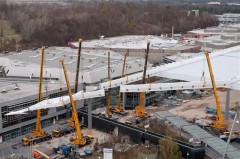 Now a spectacular air-cushion roof (slats with air-filled membrane cushions stretched between them) covers the area in front of the main entrance of the exhibition and congress centre in Nuremberg. The steel construction - 18 metres high and 255 metres long - spans 8,000 square metres. read more 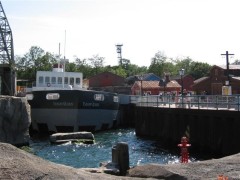 A fantastic underwater world in a body of a ship, an old gold mine and typically coloured Canadian timber houses – with the theme world "Yukon  Bay" the Hannover Zoo has one attraction more. After a total construction time of 30 months the theme  world opened to the public on 22nd of May, 2010. read more

After nearly two years of construction on in Dresden the new Rudolf Harbig Stadium was officially inaugurated on September 15th 2009. The replacement began November 2007 with the demolition of the “Hornbach” grandstand. During operation the stadium of SG Dynamo Dresden was extended to 32,000 places. read more

A new home for the aeroplanes

Dynamo with a new roof

Hump day has been. More than one half of the steel structure for the roof of the Rudolf-Harbig-Stadion in Dresden has been already produced by the ARGE Rohlfing/Profil, placed on the grandstand bars and fixed. read more

An Abbey is coming into being again

A long, long time ago it has been the largest Abbey between Bremen and North  Friesland. 1529 the Cistercian Abbey “Schola Dei” in Ihlow (district Aurich) had been demolished due to reformation and secularisation. Now the Abbey will be rebuild in original size as steel sculpture. read more

A Landmark for London

The construction work is in progress. On July 20th the Serpentine Gallery Pavilion  2008 will be opened. This year the Pritzker Prize Winner of 1989, architect  Frank Gehry was asked by the Serpentine Gallery Commission to design the summer  pavilion. As in 2007 the company Heinrich Rohlfing GmbH is building the steel  structure. read more

It will be one of the world’s largest shopping and entertainment destinations. End of August 2008 the „Dubai Mall“ will open in Downtown Dubai (United Arab Emirates). The Dubai Mall has a total internal floor area of 5.9 million sq ft and gross leasable space of 3.77 million sq ft, which is equivalent to the size of 50 football fields put  together. The 1.8 kilometres rails for the retractable roof of the Mall will be delivered and installed by Heinrich Rohlfing GmbH. read more

First opened in August the Serpentine Gallery Summer Pavilion 2007 now already has been closed again. Autumnal pavilion called it critical voices. “It has been worth  waiting for“, says The Daily Telegraph as well as The Times and The Guardian. Now the structure will be dismantled.

A spectacular building for the Hyde Park

The Serpentine Gallery Pavilion 2007, designed by the internationally acclaimed artist Olafur Eliasson and the award-winning Norwegian architect Kjetil Thorsen, of the architectural practice Snøhetta, is now open to the public and will remain on site until November 2007. The steel structure was built in Stemwede/Germany by the company Heinrich Rohlfing GmbH. read more

In October 2007 the new “SchauBox“ opens next to the Universum  Science Center  in Bremen/Germany. Varying special exhibitions will be shown in that rust-red Pavilion with a length of 35 meters and 700 m². The cladding was built by Rohlfing GmbH. read more